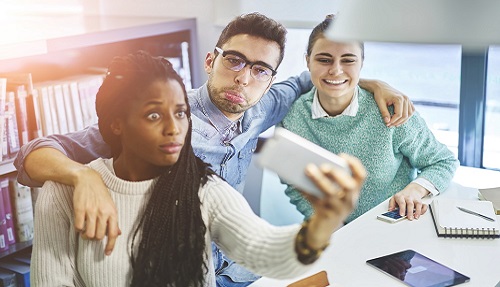 Connecting with the Millennial Workforce:

These are the words often used to describe Millennials. But is this fair? Millennials — those born in the ’80s and ’90s, also known as Gen Y — will soon make up the majority of today’s workforce. Managers need to understand the values of this generation. And surprisingly, Gen Y brings many positives to the workplace. They dream big, value authenticity and seek purpose. Here are four more reasons Millennials might just be the best workers of all:

Gen Y has grown up with technology. They’ve always had information at their fingertips, and they’re accustomed to speed. This generation has never known a time without computers. The

y’re criticized for constantly being connected to their smartphones, but this obsession with social media has its merits. Millennials understand the power of the internet and how it can be leveraged for branding. Having input from Gen Y on your team is critical for developing a successful customer relations strategy. Growing up with Facebook, Twitter, and Instagram means Millennials are accustomed to communicating to the masses virtually — a useful skill in the global marketplace.

The Millennial generation is the most educated generation in American history. About 61 percent of Millennials have attended college, compared to 46 percent of Baby Boomers. Many Millennials came of age during the economic recession at time when unemployment levels surged. They chose to pursue higher education (with many attaining deep debt), ultimately launching their careers into an environment of limited opportunity. Although Millennials are not predicted to achieve a better standard of living than their parents, they are surprisingly the most optimistic of any generation, according to a recent Pew Center report. Millennials value the ability to progress in their careers and are eager to prove they are capable.

Growing up with the internet has given Millennials a global mindset. They embrace diversity, from race and religion to gender and sexuality. Gen Y is the most diverse generation to date, with 42 percent identifying with a race or ethnicity other than non-Hispanic white (about double the ethnic diversity reported by the Baby Boomer generation). Millennials have entered adulthood at the time of our nation’s first African American president and have engaged in the debate over same-sex marriage. According to the Pew Center report, this generation has little attachment to traditional political and religious institutions. Ultimately, Millennials are inclusive, team players who are willing to think outside the box.

4. They Value Purpose Over Paycheck

Although Millennials are known as the “selfie” generation, they actually care deeply about the world around them. The Facebook generation believes one voice really does make a difference, and they are unabashedly trying to change the world. They’re not content to simply earn a fat paycheck. Millennials want to know their job is meaningful — not just to the company but in the bigger picture. Millennials are eager to join charitable causes, volunteer in their communities, and participate in civic organizations. Most Millennials think businesses can do more to address society’s greatest challenges like climate change and income inequality, according to a “Millennial S

urvey” by Deloitte. Millennials have been raised to follow their passions, and they embrace a perspective of possibility.

Gen Y is full of paradoxes, bringing a wealth of knowledge and a fresh perspective to the workplace. Millennials are creative, collaborative, and driven to make a difference. They value authenticity and pursue the greater good. For these reasons, Millennials may just be the best generation of workers yet.

How Your Training Programs Can Be More Effective

SCHEDULE AN APPOINTMENT!
Subscribe to our Newsletter!Sign up to receive our monthly newsletter and stay up to date with the latest industry news and events.